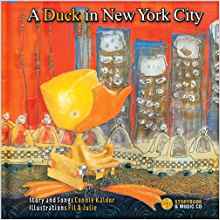 A Duck in New York City

The title story-song is about a little duck from the Prairies who has a big dreamâmaking it to New York City and doing his ducky dance on Broadway! It turns out to be an adventurous journey that appears bound for failure, until he meets up with a truck driver named Big Betty. She points him in the right direction and gives him that little nudge he needs to tackle the Big Apple. Additional songs feature alligators that waltz at midnight, little girls who sing off-key to get tomatoes thrown at them, and opera-singing slugs that sneak out at night to do the boogie-woogie.